The SuperCup NI kicks off in a matter of weeks – with the ball of choice one again being the Mitre ProMax. The tournament, previously known as the Milk Cup, has seen it’s graduates win World Cups along with European trophies – and this years group will be hoping their future is as bright as those before them.

Double winner Keith Gillespie was one of those at the launch and he reckons his former club Manchester United will continue to be a force at the SuperCupNI after their entry this year. The ‘Class of ’92’ won the SuperCup NI back in ’91 with like likes of Butt, Scholes and Beckham. 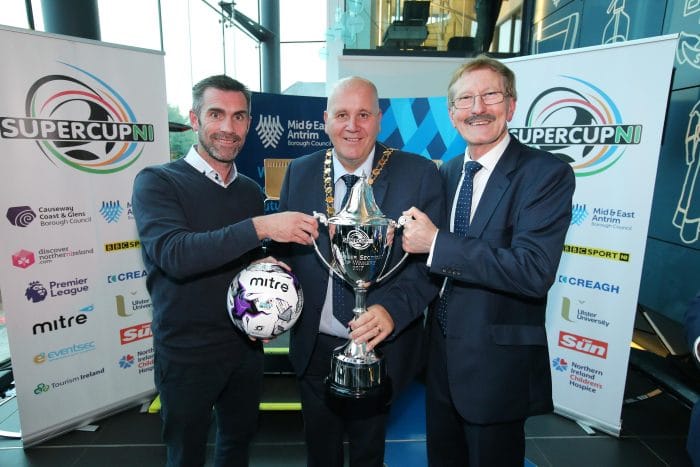 “I’m pleased they have reconsidered and come back in the Junior competition,” he said at the official launch of this summer’s 35th tournament in Ballymena.

“United have such fervent support in Northern Ireland and their teams have always been a massive draw for fans every July when the SuperCupNI kicks off.

“I know that even when they didn’t come here for a couple of years, relationships with the organisers remained strong and friendly which is a tribute to the people who run the event who I know are highly respected at United.”

Gillespie won the Junior title with Dungannon Swifts in 1989 and lifted the Premier title in the famous Manchester United side of 1991.

“It is great to see the excitement among young players preparing for the competition. I know that in Northern Ireland, representing your County at the competition is a huge honour and the goal of every schoolboy footballer.” added the ex-United and Newcastle United midfielder who was capped 86 times for his country.

For the second year, as part of the tournament, women’s football will showcase two matches with Northern Ireland taking on Wales prior to the main competition.

“I am sure you would agree that this tournament promises to be every bit as exciting as previous years,” said Councillor Reid who also congratulated the organising committee for their hard work throughout the year to deliver this tournament.

Chairman Victor Leonard said: “We owe our supporters a huge debt of gratitude for backing us for more than three decades. This event is all about them.”