This site uses cookies to provide and improve your shopping experience. By continuing to use this site, you agree to accept these cookies.
For more information, please see our Cookies Page
More Info
Ok
Mitre BlogPartnersLadbrokes Scottish Premiership off to a flyer
Menu
Partners, SPFL

Ladbrokes Scottish Premiership off to a flyer

What a start! Less than two months into the new Scottish football season and its already proving to be somewhat of a rollercoaster for teams and fans throughout the Ladbrokes Scottish Premiership.

With six wins and a draw from their seven games so far, Celtic currently sit at the top of the pile with a couple of points’ breathing space; and, with Partick Thistle and Kilmarnock yet to win a match, they find themselves in an unfortunate relegation battle early on.

Ross County started with a win, but since then it’s been downhill; parting company with manager Jim McIntyre this week after their poor run of results. The very recently hired youth academy director, Steven Ferguson, has taken temporary charge whilst a new manager is recruited and they’ll be hoping the change kick starts their season!

Aberdeen have Celtic very much in their sights as they prepare to take on the current third place team, St Johnstone, in the first fixture of this weekend, and could go top (possibly temporarily) with a win on Friday night.

Big-spenders Rangers have a little ground to make up, but will be hoping that their new additions start to gel together increasingly as the matches go by. Hearts are also coming to terms with several squad changes, and notably a new manager in the summer; fans will be hoping Craig Levein will make the difference in what is clearly a club with some quality on the pitch.

Highlights of the season so far

A contender has to be the incredible sliding tackle made by Josh Windass on his own manager during the first Old Firm derby of the season. Pedro Caixinha had little warning before his legs disappeared underneath him on the touchline; but, fair play to the Rangers boss, he didn’t stay down for long! It was probably the only highlight for Rangers fans on the day, as they went down by two goals to the visitors.

On the pitch, our top moment so far has to be Kieran Tierney’s cracking strike for Celtic against Kilmarnock back on 19th August. What a hit! 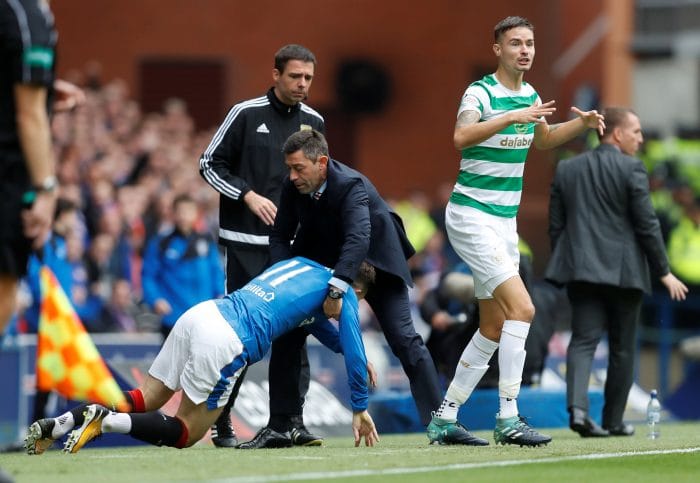 Neil Lennon returns to Parkhead for the first official business since he left as Celtic manager, when he takes his Hibs team back there this weekend. We’re sure he’ll set emotions aside to focus on the match itself, but after he spent four years in the dugout as Celtic boss, we reckon it’ll be difficult for him not to feel anything at all on his return. Will Hibs have enough to stop the Celtic train from rolling onwards?

Whilst it’s still early days in the SPL season, we’re looking forward to how things shape up between the current top six between now and Christmas. With Motherwell, Rangers, Hibs, St Johnstone and Aberdeen clearly all able to take points from teams lower down and each other – this could shape up to be a very tasty battle after all.